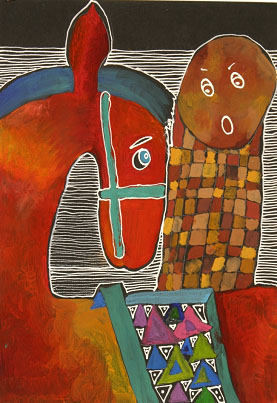 The 36th International Children’s Exhibition of Fine Arts Lidice 2008 will be opened in the Lidice Gallery of the Lidice Memorial on Wednesday 28th May 2008, attended by ambassadors and political and cultural figures of the Czech Republic.

For the time being, the following personalities promised to attend: the first Deputy Minister of Culture of the Czech Republic, JUDr František Mikeš, Deputy Minister of Education, Youth, and Sports, doc. PhDr Dušan Lužný, Secretary-General of the Czech Commission for UNESCO, Ing. Pavel Škoda, the ambassadors of Azerbaijan, Bosnia-Herzegovina, Finland, Democratic People’s Republic of Korea and Poland and representatives of the embassies of Bulgaria, China, Croatia, Iran, Japan, Peru, Russia, Slovenia, Serbia and Syria.

The best child artists from the Czech Republic and the best artist from abroad will be awarded “Rose of Lidice” medals during the ceremonial opening. This year an 11-year-old Croatian girl, Sara Cuklin from Fotoklub Varazdin, will be awarded the medal for her collection of photographs.

Pupils of the Buštěhrad Primary Art School and children from Sportklub ČASPV Kladno will appear at the opening. An accompanying programme begins at 10 a.m. with a theatre performance of “Cinderella” presented by the Dell’arte theatre from České Budějovice. Entertaining plays and games for children will be prepared by the Leisure-time Centre Labyrint Kladno throughout the day.

As indicated by its name, the exhibition and competition is held every year to commemorate the murdered children of Lidice. Initially national competition (established in 1968) changed its status to an international one in 1972. The exhibition is well-known among young artists and their teachers not only in our country but all over the world. Children from dozens of countries of all continents, including such exotic countries as India, Indonesia, Philippines, Kenya, Srí Lanka and Zimbabwe, take part in the exhibition every year.

As the year 2008 was declared the year of potato, the UNESCO proposed to dedicate the 36th edition of the International Children’s Exhibition of Fine Arts Lidice to a theme relating to the word POTATO. The second recommended theme of the exhibition was WORLD LANGUAGES.

The unusual themes of this year’s edition aroused our curiosity about how inspiring the themes would be for children and how they would capture them artistically. We were surprised at and pleased with how many interesting projects, techniques and works arrived from children from all over the world. Children hadn’t been caught unawares by the themes by any means so we were able to compare often remarkable views of the popular foodstuff as well as the ways of communication.

Within the theme POTATOES, children could draw inspiration from the many following detailed themes –“Potato as a Plant and a Flower”, “The Tools Used for Potato Growing and Harvesting”, “Potato Dishes”, “Potato Fields”, “Potato Recipes”, “Things Made from Potatoes”, “Cultivars, Shapes and Colours of Potatoes”, “Works Related to Growing and Harvesting of Potatoes”. Most of the works showed that their creators were interested also in the origin of potatoes, as well as the ways potatoes are grown or processed. Some pictures showed Peruvian Indians growing potatoes as early as 6,000 years ago. There were so many ships on the pictures carrying potatoes from Ecuador to Europe (mid-16th century) that they would have been able to form a fleet. Among pictures of potato fields tilled by men and horses, pictures of sprouting or blooming potato plants, pictures of potatoes in various stages of processing – raw, unpeeled, peeled, sliced, grated, potatoes being boiled or fried, chips, potato fritters, potato pancakes – there were also pictures of families sitting at table with their plates full of potatoes or of Mother preparing food. Cookbooks with drawings or photographs containing recipes and preparation procedures of favourite potato meals weren’t unique.

Three-dimensional works always liven up the exhibition. Ships with Christopher Columbus aboard “came” to Lidice with a freight of the precious foodstuff, larger than life potato beetles swarmed up, ceramic, wire or paper baskets and sacks arrived full of potatoes and chips made out of various materials.

The theme WORLD LANGUAGES and COMMUNICATION offered the following detailed themes: How Nations and Ethnic Groups Make Themselves Understood”, “The More Languages You Know the More You Are a Human Being”, “Interpersonal Communication”, “Can Animals Distinguish Various World Languages?”, “The Same Language May Sound Different in Different Countries It Is Spoken”, “Various Nations and Ethnic Groups in My Country Speak Different Languages”, “My Favourite Foreign Language and Why I Like It“. Most often, children tried to picture a group of people communicating with each other or attempted to show animal communication. Thus, dogs, cats, horses and even exotic animals in foreign countries or zoos appeared in pictures. Since animals are very important mediators in children’s communication with the world, many works depicted children communicating with their pets.

The unique international exhibition displays children’s paintings, drawings, graphic works, photographs, ceramic works, and works of combined techniques. You can see fine art works of children from 48 countries including the Czech Republic in this year’s exhibition presented in the Lidice Gallery. We are pleased that most of Czech and foreign schools have become regular participants in our competition and exhibition, joined by additional schools each year. For instance, this year it was children from People’s republic of Korea and Peru.

Like every year, it was very interesting to compare styles of submitted works and their degree of elaboration as well as inventiveness and creative contribution of a child or group of children. Comparing works, techniques, themes and ways of interpretation of the themes by children from all over the world is always very interesting experience. Traditionally, pictures by children from exotic countries such as Srí Lanka, India, Indonesia, Thailand or Singapore caught our eye, and as every year, children from Bulgaria, Romania, Russia, Ukraine, Latvia and Lithuania contributed with their distinct collections of paintings and graphics.

Out of the total 6,788 exhibits received, the Panel of Judges selected 1,011 exhibits for the purposes of the exhibition, out of which 492 works were from abroad. In total there were 129 medals awarded. 67 medals for exceptionally good works of fine art were sent abroad this year. Works of fine art by children from Croatia for their photo collections (12), India (4), Indonesia (4), Kazakhstan (4), Russia (3), Lithuania (3) and Latvia (2) won most of them.

Bringing hope, joy and youthfulness along, the International Children’s Exhibition of Fine Arts Lidice is an important and indispensable counterpoise of the tragic connotations of Lidice. We believe that the time spent visiting the exhibition will be pleasant, inspiring and peaceful for young and old visitors alike as it was for us, whether they will visit it at Lidice or anywhere else in the world.

Mgr. Ivona Kasalická
Head of the Lidice Gallery and Curator of the International Children’s Exhibition of Fine Arts Lidice
312 253 702; 736 642 318, kasalicka@lidice-memorial.cz